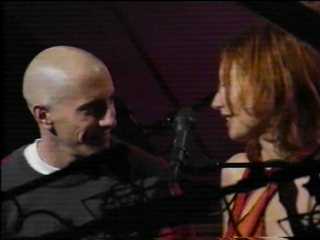 When this show happened, Tori's 1996 Dew Drop Inn Tour was already over. This show was a benefit for her charity organization, RAINN (the Rape, Abuse, Incest National Network). Tori, already acquainted with Maynard, invited him onstage to perform a duet; the song he chose was "Muhammad My Friend", from her third album ("Boys for Pele"). Tori introduces him as one of her dearest friends, saying she calls him when she's feeling terrible and he sings her lullabies.

For more information on things Tori, check out a Tori Amos page. I recommend A Dent in the Tori Amos Net Universe.

"Maynard is... well, first of all he makes the greatest cookies I've ever had. And Maynard's so wonderful. He just really is. And he's a good buddy, so I called him up. Maynard's got a lot of interesting ideas about many things."

-- Tori, in an interview from the online magazine Addicted to Noise.