no one is innocent

This site is no longer being updated. See here for details. Follow me here and here for updates. Thank you for 22 great years. (And yes, lyrics are posted for new album "Fear Inoculum".)

fame popular places that got wind of us

Warning: I am SO behind on this (I mean, since like 2002), it is almost dumb to have this here anymore.

This site collects "New and Cool!" awards frequently enough that I have trouble keeping this page remotely up-to-date. It has not been really updated since 2002. 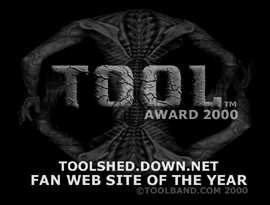 The Tool Page is one of the few links you'll find on Tool's Official Site. And we were the only recipients of their "Fan Site of the Year" award, back in 2000.

Back in 1997, smack in the middle of a three hour show on Tool, featuring only Tool music and interviews, guess who was featured in a live telephone interview on-air across an entire continent?

No, it was Kabir. For 15 minutes he yammered on about various things with DJ Richard Kingsmill. Hopefully this will be available for download here soon.

Then in May of 2001, the call came again, and Kabir was on for five or six minutes again!

This site and the FAQ were quoted in Tool's bio in the free info publication given out at Lollapalooza 1997. The whole thing was basically from t.d.n. That's so cool.

The March 1997 issue of AP Magazine, with Tool on the cover, not only mentioned this site, but a good 10% of the article focused on t.d.n as well as yours truly.

The July 1997 issue's cover showed the words "Disinformation on the Internet" at the top; the corresponding story inside featured t.d.n as the bookends to the story (mainly myself and the April Fools' joke).

Apparently, at 1:15 AM, EST, early in the morning of December 27, 1996, while Kennedy was introducing a Tool video, the words "http://toolshed.down.net" popped up in front of her. If anyone has a copy of this, I'd love to see it. Thanks to Bartley Harrison (Godwithgun@aol) for alerting me.

A winter 1996-7 issue apparently mentioned this site. If you know more about this, I'd love to hear from you.

Imitation is certainly high praise; Heather Scott set out to create a site as all-encompassing as t.d.n is for another band.
Faith No More's site at http://www.fnm.com certainly does the job, and even thanks t.d.n at the end. Nice.

t.d.n has also formed the basis for many other sites, notably the FAQ for Sunny Day Real Estate (it's a band), as well as inspiring parts of the Everclear FAQ.

This site was voted Best Unofficial Artist Site in the Shoutweb Awards 2000.

And you thought you had to be www.something.com to succeed.

A newsprint publication by a record store franchise in Arizona not only mentioned this site and the FAQ in their December - January '97 issue, but also plagiarized from the FAQ extensively. Thanks to XMaise@aol for the heads-up and for mailing me a bunch.

A 1996 review of Ænima at msn.com came complete with a link to one site: The Tool Page. Nice.

In 1995, BMG sent out their music catalog as a list of cool websites, and mentioned The Tool Page (notice then-current URL). I found out when someone stopped by the CD store I worked at and high-fived me. I had no idea anyone from a major conglomerate was paying attention to my work until then. Thanks: jet maier + violator (irwi1288@rowan)

Mentioned (briefly) in the online magazine Addicted to Noise in late 1996. It was an honor, back then.

t.d.n has been quoted in high school papers, college presentations, and at several doctoral dissertations. No lie.

Reviewed on The Knowledge Network

Awarded the maximum rating by RockGuide, Rolling Stone Magazine's online catalog. Their site did not survive as long as toolshed has.

Another spinoff of RollingStone.com, charting hot singles. This "you're-the-best-Tool-site" award came as "Stinkfist" made their charts. Their site did not survive as long as toolshed has.

Reviewed in the then-important web directory Magellan. Never got them to rate us as a 4-star site. Then again, we're still around and they're looooooooong gone.

Singled out at Yahoo!

t.d.n is one of many Tool sites listed at Yahoo! [edit: yes this link is dead, but it worked back in 1998] but was the first one to be awarded a

, a distinction which they explain as "we think this site has good presentation/content for this respective topic area. Usually, you should check these sites first." w00t.

Mentioned on the Radio!

The Tool Page has been mentioned on-air on the following radio stations, as well as others that nobody has verified for us:

* thanks to the plugging skills of Adam Rubinstein (adamr@ultranet)
^ plugged onair by Mr. Scary (jansier@iwu)

... and apparently countless others ... fill me in!

Linked from countless other sites

Thanks to everyone for their support, their contributions, and their links (from web sites and Myspace pages and so on). I can't say it enough, I guess.

If you've heard about toolshed somewhere else cool, let me know! It's always good to know that the site is doing well...